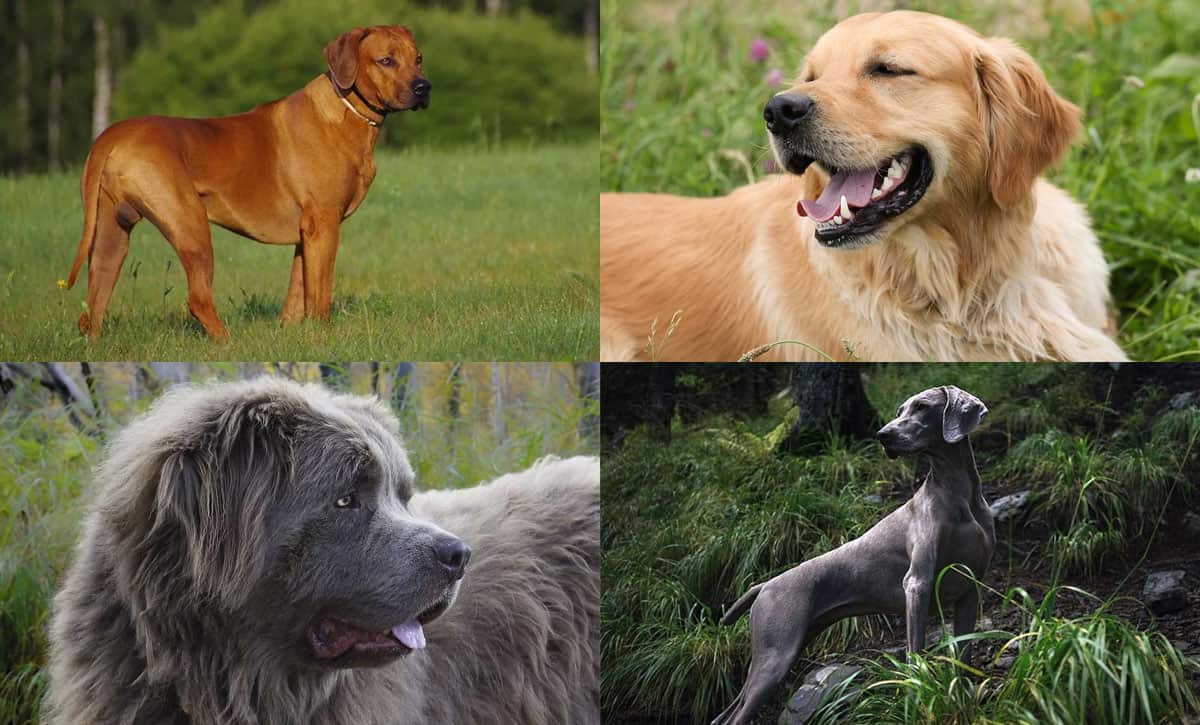 Can you guess the UK’s top 20 large dog breeds?

At the start of 2019, ITV carried out a survey of 10,000 people to find out Britain’s favourite dog breeds.

The results were broadcast live by TV presenters Ben Fogle and Sarah Cox on a program called “Britain’s Favourite Dogs”.

They were joined on live TV by a selection of different dogs to showcase the best of their breeds.

According to the list, here are Britain’s 20 most popular large sized dog breeds.

Can you guess who comes out at number 1?

Go on, give it a go, and then scroll down to see if you are correct!

The Siberian Husky is a medium-large dog and the only Husky type to make it to the top 20 large dog list.

Siberian Huskies have a thick double coat and they are used to working in cold temperatures and running through snow.

They look very similar to the Alaskan Malamute, but huskies are smaller. 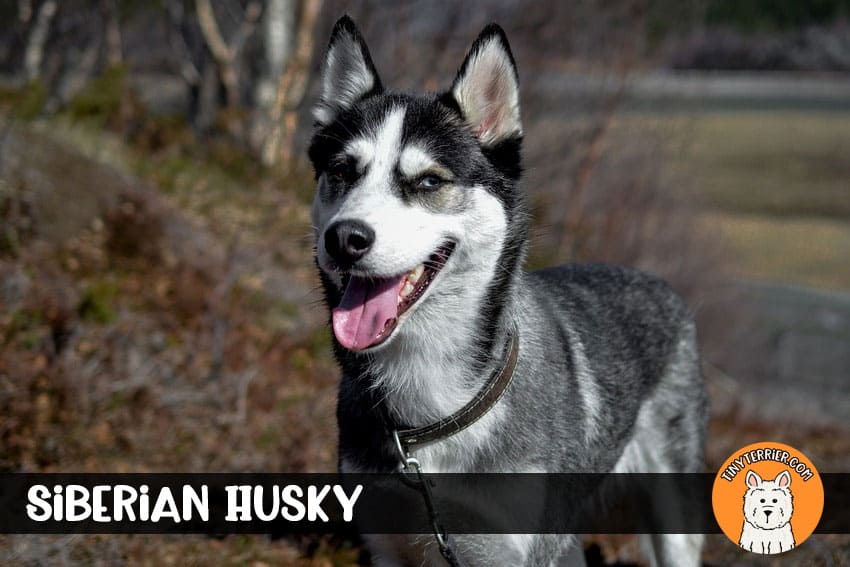 Newfoundlands are actually a giant dog breed rather than a large, but I’ve included them in this list as only a couple of giant dog breeds made the cut, so I didn’t want to leave them out!

Male Newfoundland dogs can weigh up to 70kg and the females reach around 55kg.

They are well known for their thick fur which helps keep them insulated in water. 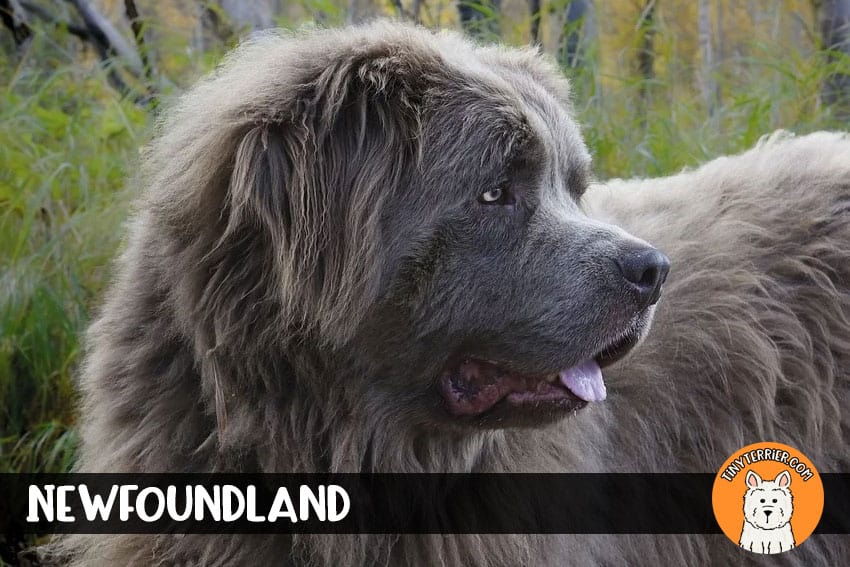 The Hungarian Vizsla is a sporting dog from Hungary.

They are striking to look at, with their golden coat and majestic stature.

Vizlas need enough daily exercise to keep them to their gentle, lively natures and to avoid them playing up due to boredom or too much energy. 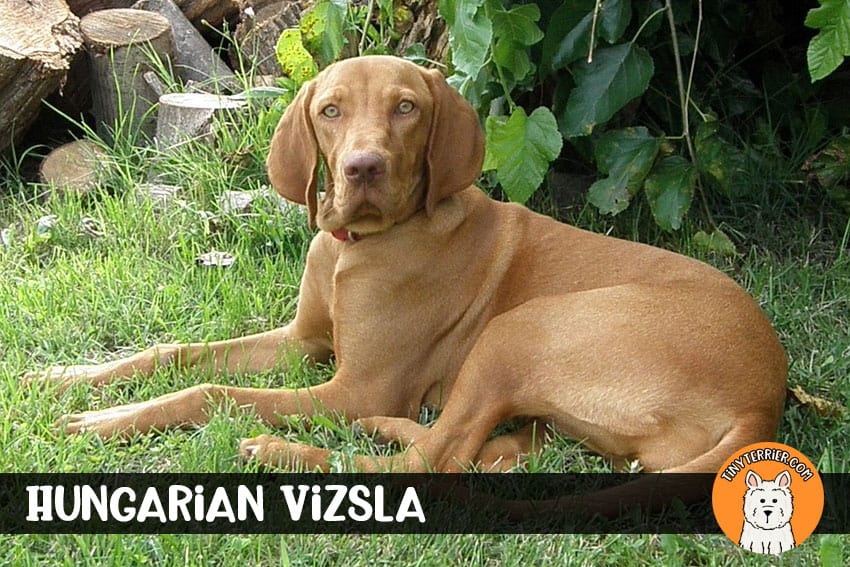 As the name suggests, Old English Sheepdogs are used by farmers for herding sheep and other livestock.

They are friendly dogs and highly intelligent and trainable which is perhaps why they feature in so many films, TV shows and commercials.

They have thick, long coats which need regular coat care to stop it getting matted. 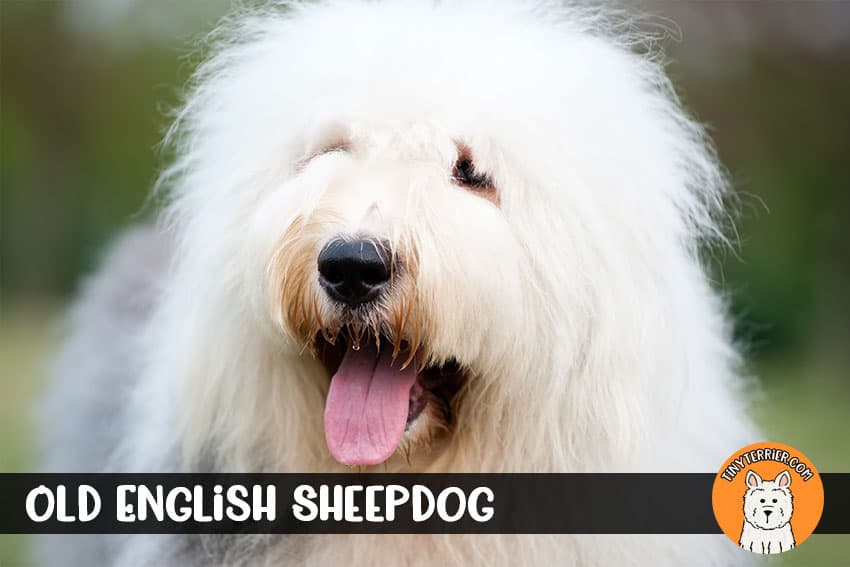 Rhodesian Ridgebacks look somewhat similar to Hungarian Vizslas, but the Ridgeback originates from Southern Africa and was originally bred as a hunting dog.

They have a red gold coat and they are loyal, strong willed dogs who can be mischievous!

They get their name from the distinctive ridge which runs down their spine. 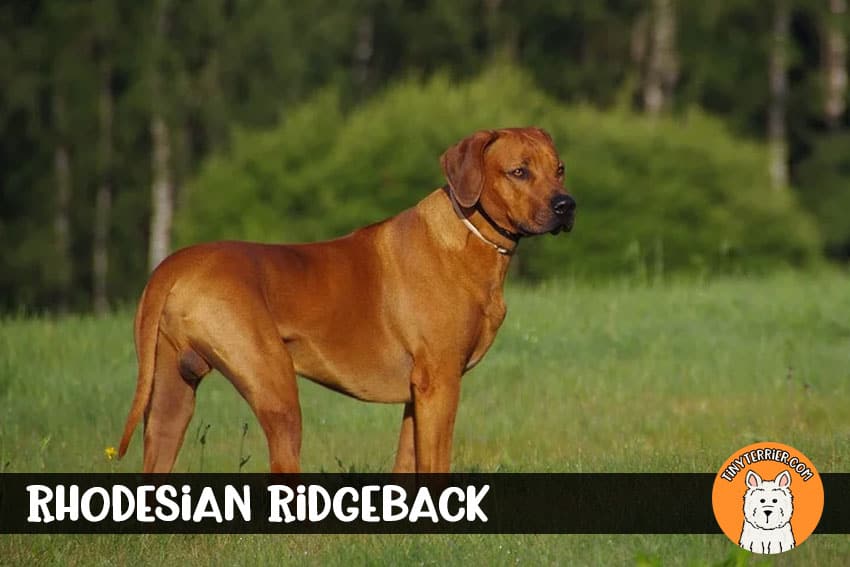 German Shorthaired Pointers originate from Germany and they were originally bred for hunting.

They come in a range of colours, including live roan, liver, brown, white and chocolate and liver and white.

They love to cuddle up with you on the sofa after a long day of hunting or exercising. 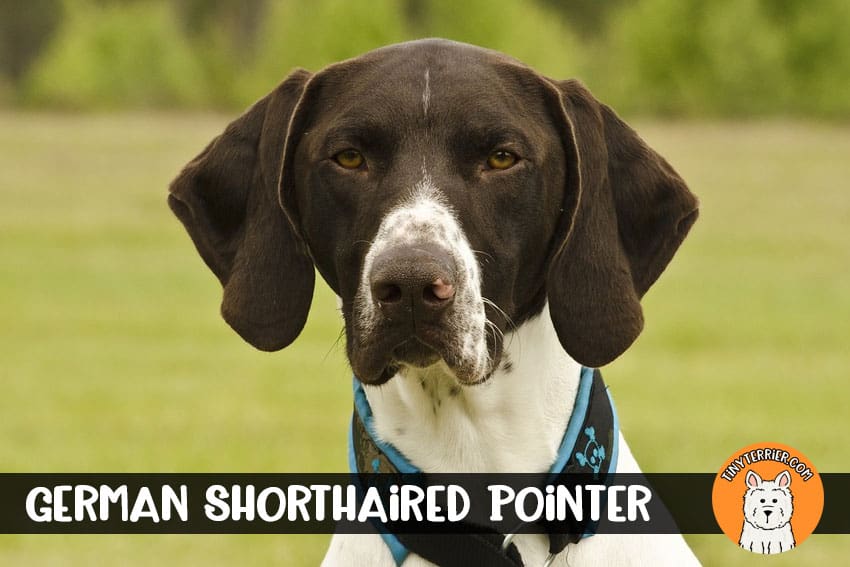 Greyhounds are a type of sighthound, and the breed most commonly used for racing.

They are incredibly fast and can reach speeds of up to 72km/hour!

Despite their reputation as a racing dog, they can be incredibly lazy.

Retired racing greyhounds in particular are often happy to spend the majority of their time sleeping on the sofa once their competitive days are behind them! 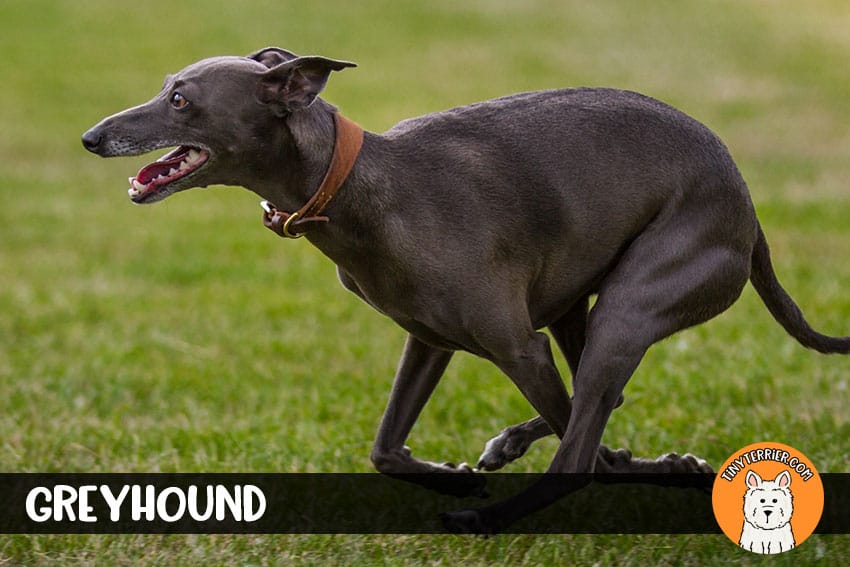 The Rottweiler is a German dog which was bred to herd livestock and pull carts.

They are thick-set, muscular dogs and these days are often used a guard dogs.

Rottweilers are fearless, loyal dogs that will protect their families or masters at all costs. 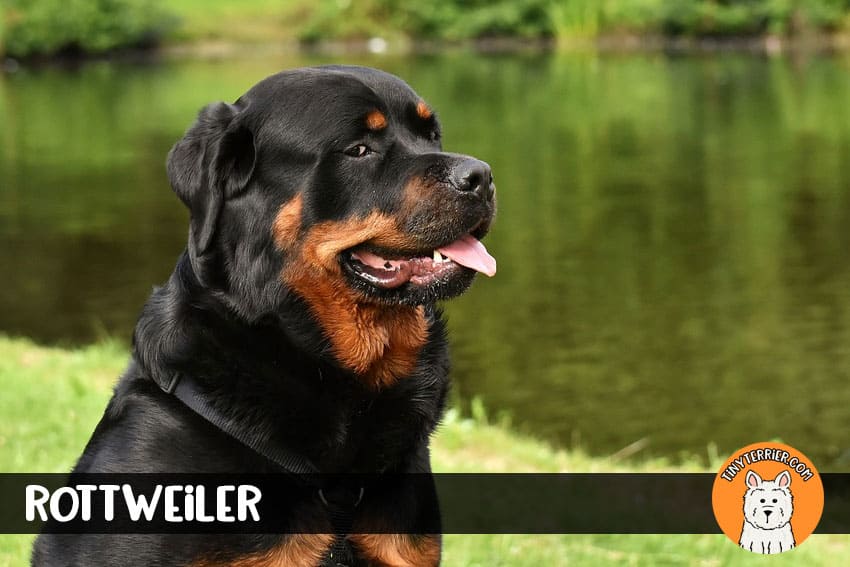 Iris Water spaniels are the largest of all spaniel types.

It is a fairly rare breed, so it’s great to see it featured in this list of popular large breed dogs.

As with most spaniels, with Irish water spaniel is an intelligent, active dog.

They have curly fur and webbed feet to help them swim. 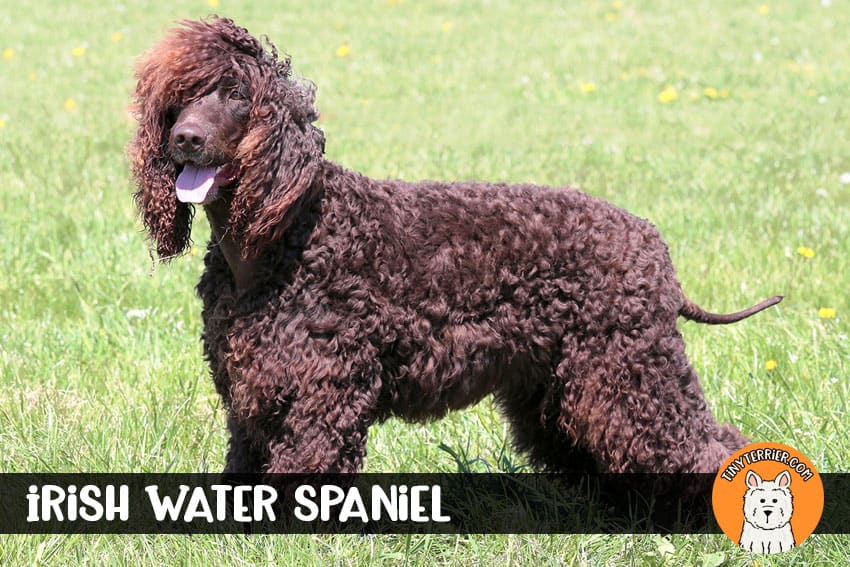 English Setters are perhaps more of a medium sized dog than a large one, but I included them here are some setter types can get quite large!

They have long silky fur, usually with pretty markings in different colours.

They make good hunting dogs due to their stamina and strong sense of smell, but their gentle natures also make them great family dogs. 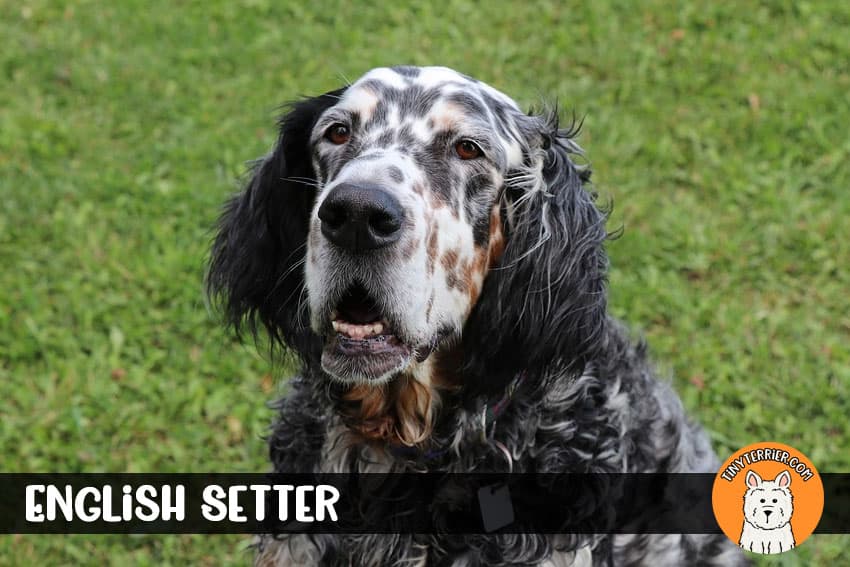 It’s time for another giant breed!

Great Danes are very large dogs and in fact it’s a Great Dane that holds the current world record for World’s Tallest Dog!

They are gentle giants and can make great family pets although of course you need to watch them around children as sometimes they just don’t realise how big and heavy they are!

Despite their size, they are a fairly low-energy dog who shouldn’t be over-exercised as it can cause problems with their joints. 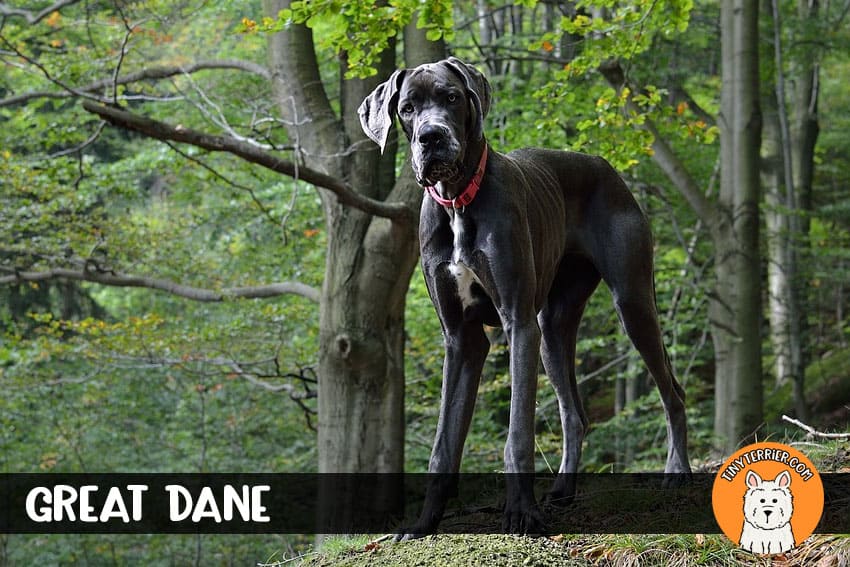 Dobermans are powerful dogs who typically weigh between 65-90lb.

I was quite surprised to see Dobermans make the Top 20 dog breeds list, as I don’t think I’ve ever actually seen one!

Doberman pinschers need socialisation and training from an early age. They are strong, energetic dogs and a popular choice for guard dogs, police dogs and security dogs. 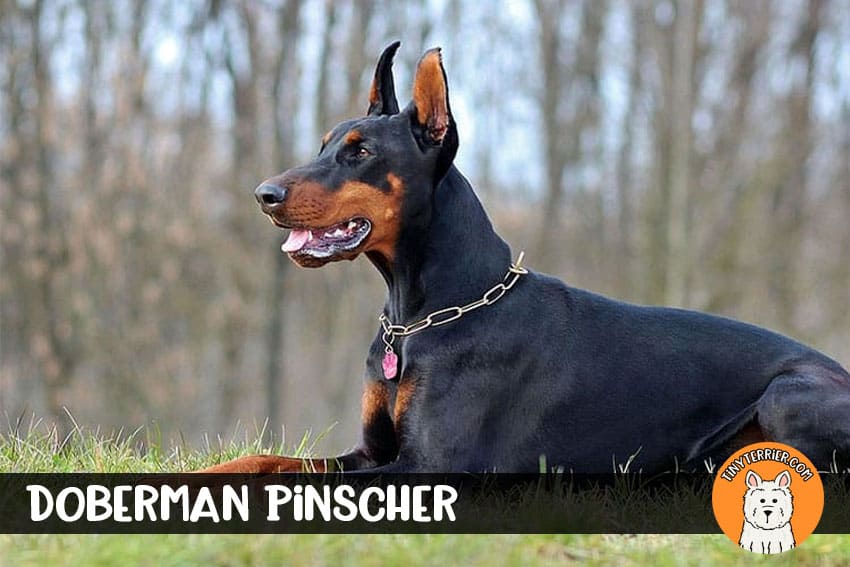 The weimaraner is a large breed of dog who enjoys hunting, hiking and outdoor activities.

They are very intelligent dogs, so they need lots of stimulation to stop them becoming destructive or manifesting their boredom in negative ways.

Weimaraners are usually grey in colour and have short coats and muscular bodies. 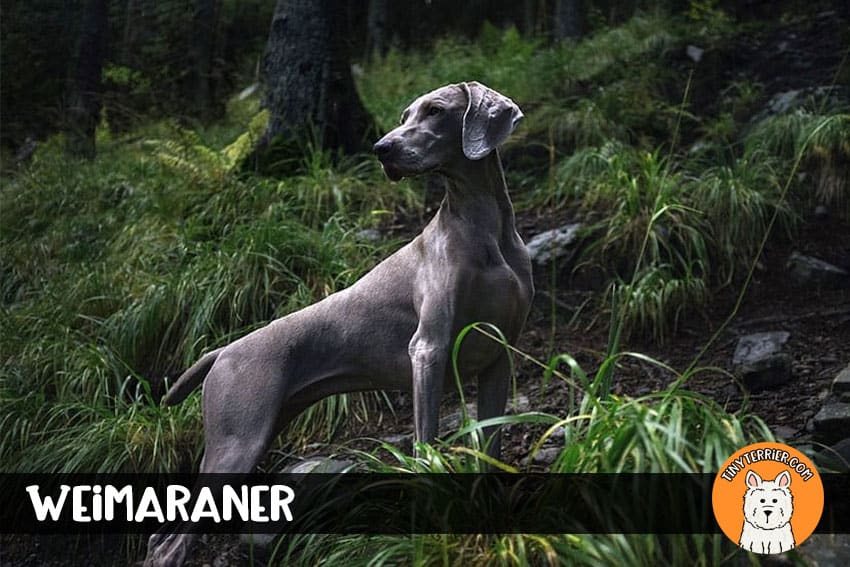 A labradoodle is a cross between a Labrador and a poodle.

Bred to be low shedding thanks to their poodle parent’s genes; Labradoodles can be a good choice for allergy sufferers.

Labradoodles come in a range of sizes (similar to poodles), from smaller dogs to very large.

They make great family pets and usually inherit the laid-pack attitude of a Labrador and the intelligence of a poodle. 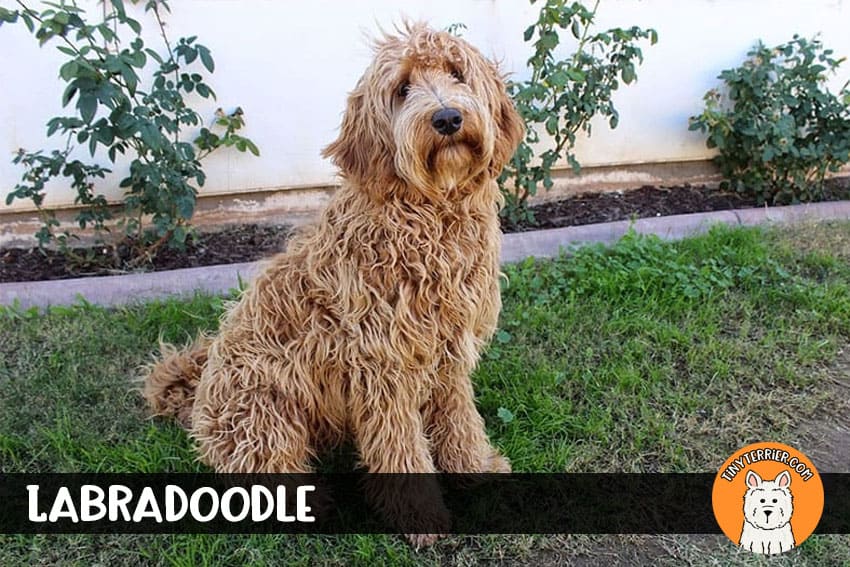 Flat-coated retrievers are gun-dogs that are often happiest when out working, for example hunting, digging and running across fields.

They are very active and intelligent dogs that require lots of exercise and mental stimulation.

Their coats are glossy and smooth (hence the name), and they can be black, yellow or live coloured.

Flat-coated retrievers have a uniquely shaped head and they are leaner and more elegant in appearance to other retriever breeds. 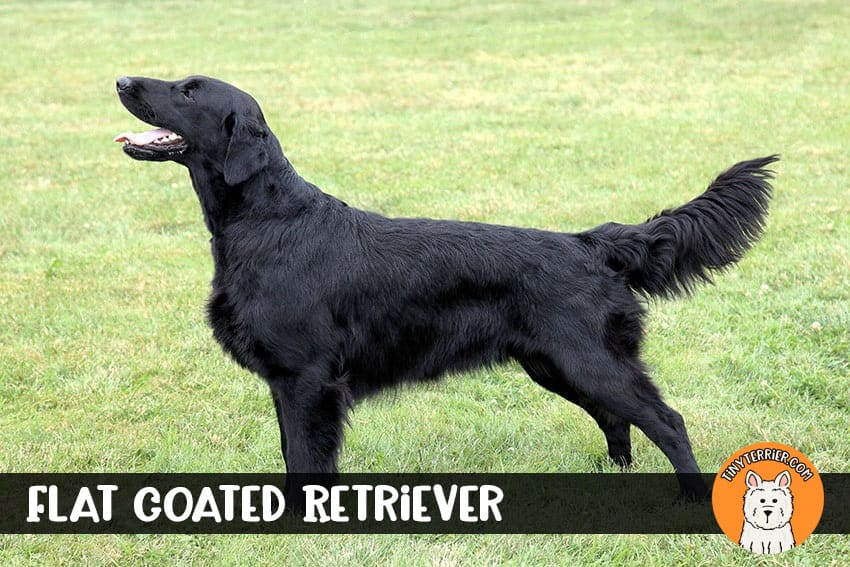 Mixed breed, cross breed, mutt, Heinz 57 – there are lots of different names for these dogs.

A mixed breed dog is one that doesn’t belong to any officially recognised breed. For example, my dog Freddie (pictured below!) is part shih tzu and part jack Russell.

Okay… I know my dog is definitely NOT a large breed… but I couldn’t resist adding a photo of him in here!

Cross breeds are great because they all look completely different and have individual temperaments and characteristics.

Mixed breeds dogs are said to live longer than pedigrees as their mix of genes can make them generally healthier and less likely to develop the usual health problems of their parents’ breeds. 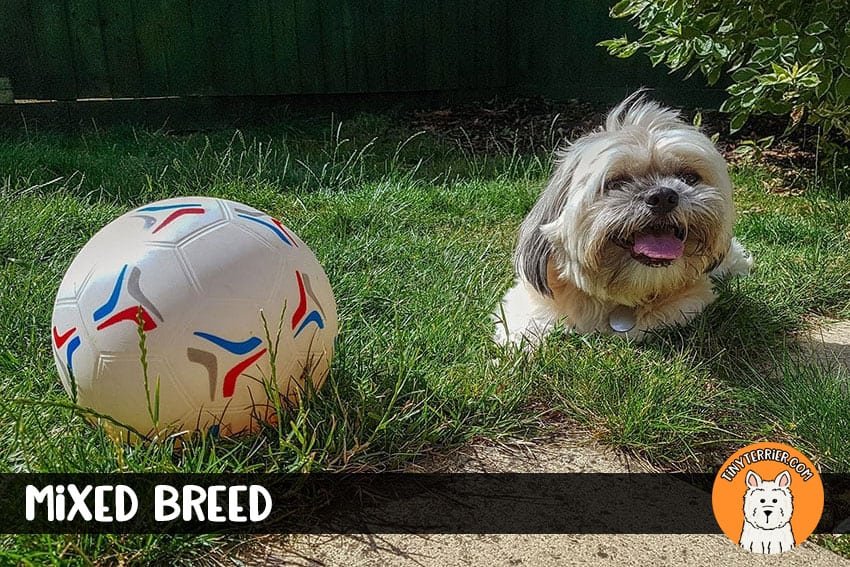 The golden retriever is the ultimate family dog.

Loyal and brave, clever and loving, when you think of the traditional family dog, a retriever surely can’t be far from your mind.

Just make sure you invest in a decent vacuum cleaner, and they shed a LOT of fur! 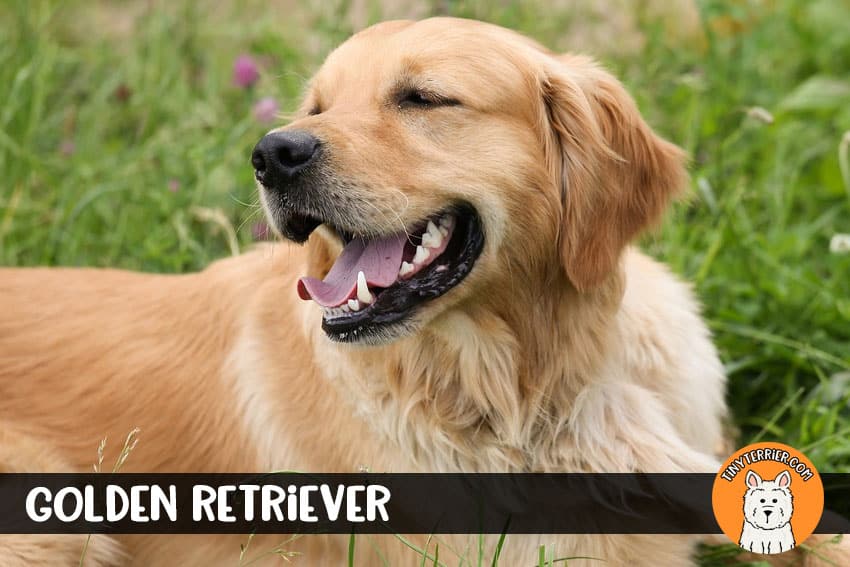 German Shepherds are medium-large dogs who originated in Germany.

When trained correctly, they can be calm and loving dogs who are well-suited to family life.

They are often associated with being police dogs or guard dogs due to their protective, intelligent personalities.

They can develop problems with their backs and back-legs in later life due to the shape that their bodies have been bred into over the years. 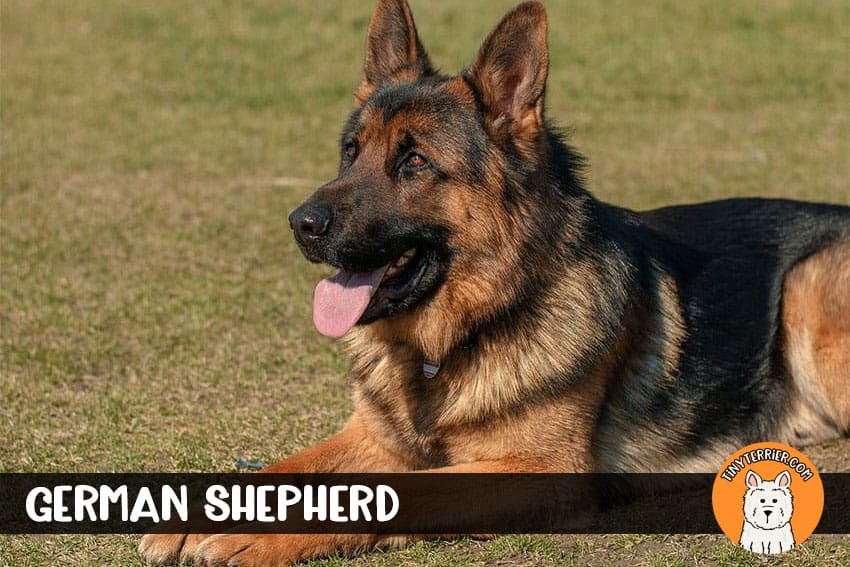 Boxers are medium-large dogs with flat coats and flat faces.

Their most common colours are fawn and brindle, although you can get other colours too such as white.

Boxes are very muscular dogs who can be extremely strong on the lead.

They have strong jaws that are perfectly suited for holding on to prey, which goes back to their origins of being hunting dogs. 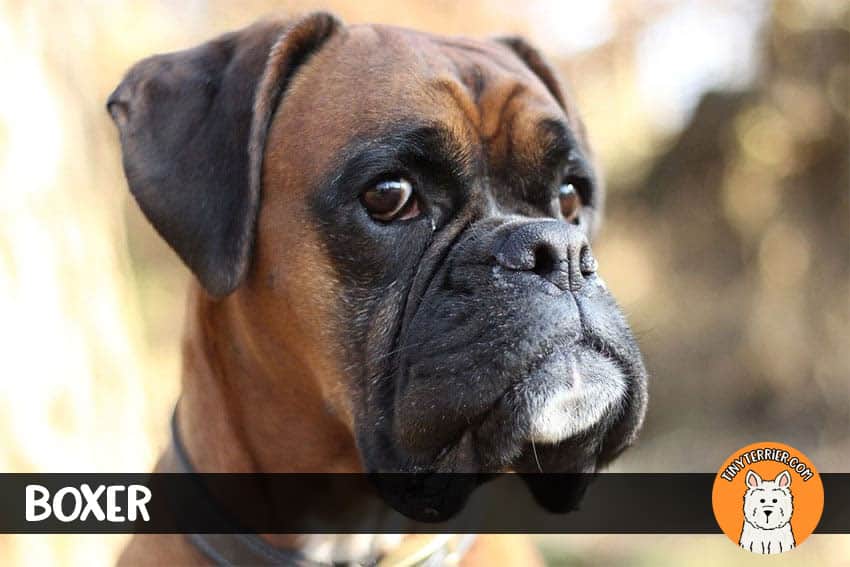 They are loved worldwide, and very popular in Britain, Canada and the United States.

They have flat coats and are most often black, chocolate or yellow in colour. 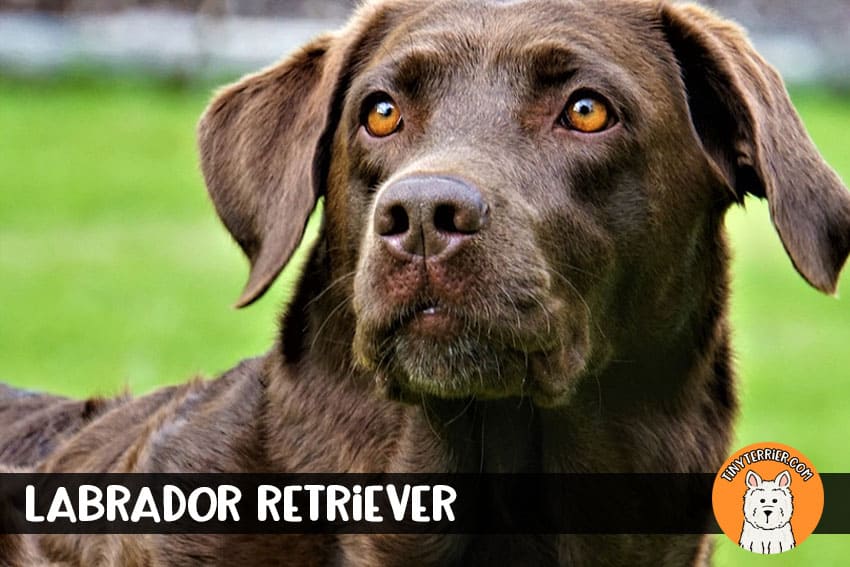 These gorgeous large dog breeds didn’t quite make it to the Top 20, but they are all just as important in my eyes!

Is your favourite large dog breed in this list?

There are probably even some large sized dog breeds that you have never heard of.

I hope that you enjoyed this list of the best large and giant sized dog breeds.

You might also be interested in discovering the Top 20 small dog breeds, best medium dog breeds and perhaps even the Top 20 breeds of any size. Can you guess who comes in at Number 1? 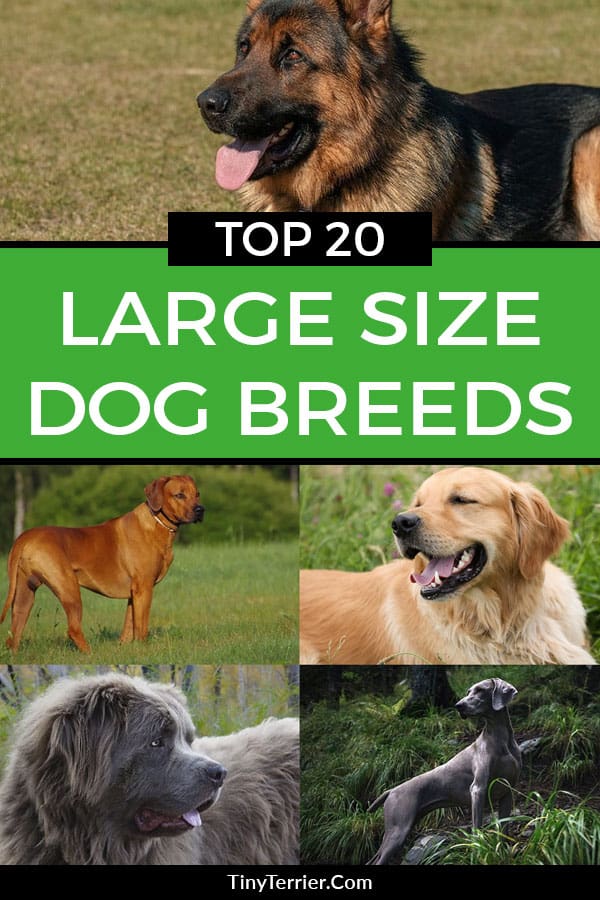 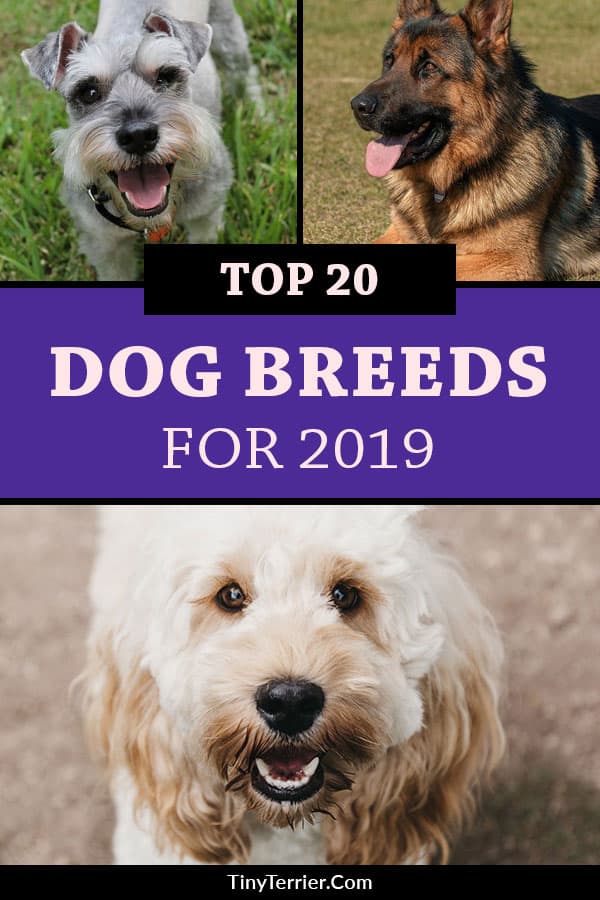 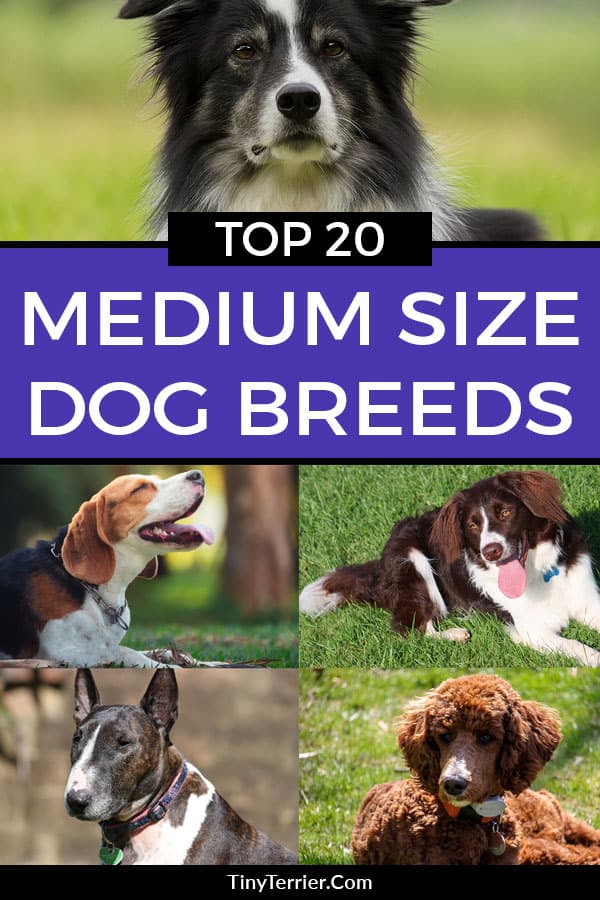 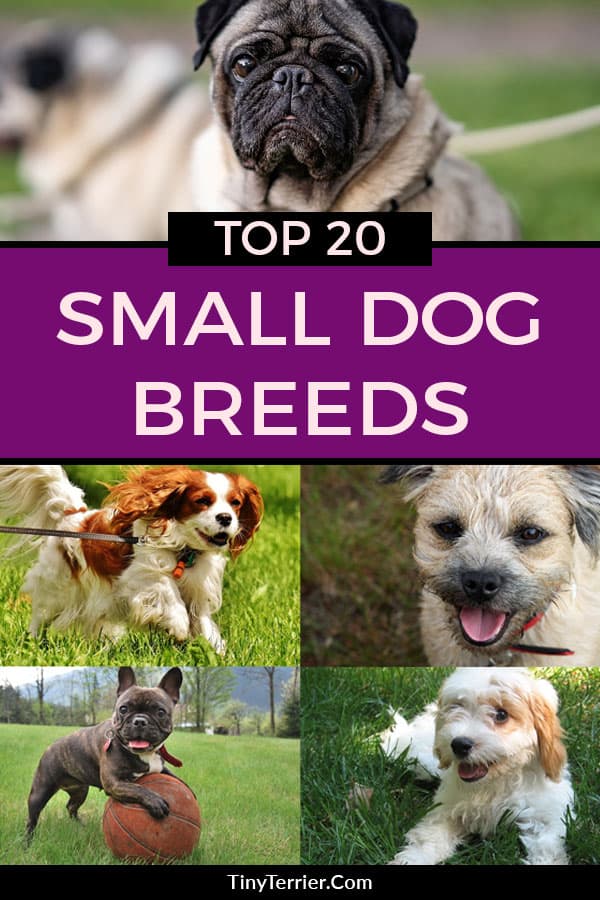 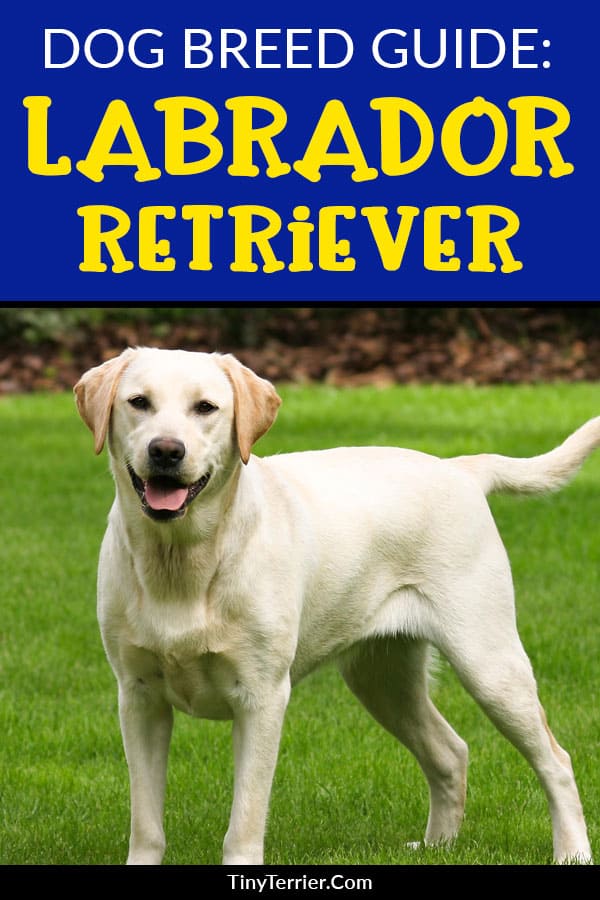